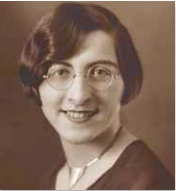 When Dr. Ida Hoos was hired as the first director of JVS, she was a young graduate student at Harvard. Her work at JVS influenced much of the rest of her career.

After her visionary leadership at JVS, Dr. Hoos finished her graduate work at the University of California at Berkley and worked at the University’s Institute for Research on Labor and Employment (IRLE). She authored Automation in the Office and Retraining the Workforce, and later consulted for NASA and the National Science Foundation. Throughout her career, Dr. Hoos was often a trailblazer challenging the status quo professionally and personally – though she didn’t see herself in such terms. Whether at IRLE, or elsewhere, she was often the only woman in the room. Likewise, she was a working mother decades before it was acceptable.

In retirement, Dr. Hoos returned to Boston to be close to family and friends. Ida Hoos passed away on April 24, 2007. She was proud of how JVS progressed over the years, noting that she was happy to see her “baby” all grown up.

We thank Ida for laying the foundation to JVS’ success that has grown over the last 80 years. Ida’s efforts, and those of her colleagues at the time, were unique, thoughtful and creative. Ida set a cornerstone of innovation that has generated impact on thousands and thousands of lives. Today, JVS staff and board members carry that same torch of innovation with the goal of changing people’s lives by building skills, securing jobs and advancing careers.

A Collection of Dr. Ida Hoos’ memories about JVS

“I was 25 when I met with Dr. Ben Selekman, director of Associated Jewish Philanthropies,” remembered Dr. Hoos. True to her character, Dr. Hoos spoke frankly, “I knew nothing of AJP except for a yellow contribution card that appeared annually in a drive for charity.”

“Dr. ‘S’ had a dream that there be a vocational arm of what was then the AJP,” said Dr. Hoos. “I was recruited. He hired me on the spot, and on June 1, 1938 at 6 North Russell Street – about where Government Center is now – Jewish Vocational Service was born.”

“There wasn’t really anyone to help people without jobs – there were social workers, but they would just psychoanalyze people’s problems,” Dr. Hoos recalled. “Before I hired anyone (JVS Staff), I required them to go out into the field on some job interviews so as to experience the full flavor of that situation: the anxiety, the exhilaration, the uncertainty, etc. It had always seemed to me that pounding the pavement in quest of a job was a stressful activity and I wanted everyone sitting behind a desk to be sympathetic.”

“In those days, there were companies who wouldn’t touch a Jew – and they would say so by simply announcing a policy of ‘No Jews Need Apply.” I hired Peg Lewis to go to employers and tell them ‘we need jobs and we want you to give them to us.’ We went to the top at places like S.S. Pierce supermarkets and got them to challenge their policies and begin considering Jews.”

“From the start, JVS functions of counseling and guidance were firmly built it. We hired a psychologist who helped people learn about themselves. We immediately set up a testing system (to determine job skills and preferences). We also did job development.”

One of the first programs started by Dr. Hoos served mostly young Jewish women, who were trying to use their filing skills to find work, only to realize there was no demand for those services. “JVS told them we would teach them, within a month, how to run a machine and get them into factory work. It paid $40 per week instead of the $13-14 many of them were earning.”

“We rented a loft in the Essex Street area and got a group of ‘girls’ together for training. They had this false image of working at sweatshops, so we started with more ‘fun stuff.’ We gave them Coke and a ‘pay envelope’ with transportation, car fare, etc. Soon it stopped being a ‘play thing’ and became a ‘work thing.’ Friendships formed among the young women. Peg placed friends in pairs, at the same factories. We helped families who had been on assistance for years. Even after our girls were employed they kept in touch with us and were encouraged to pursue their career aspirations.”